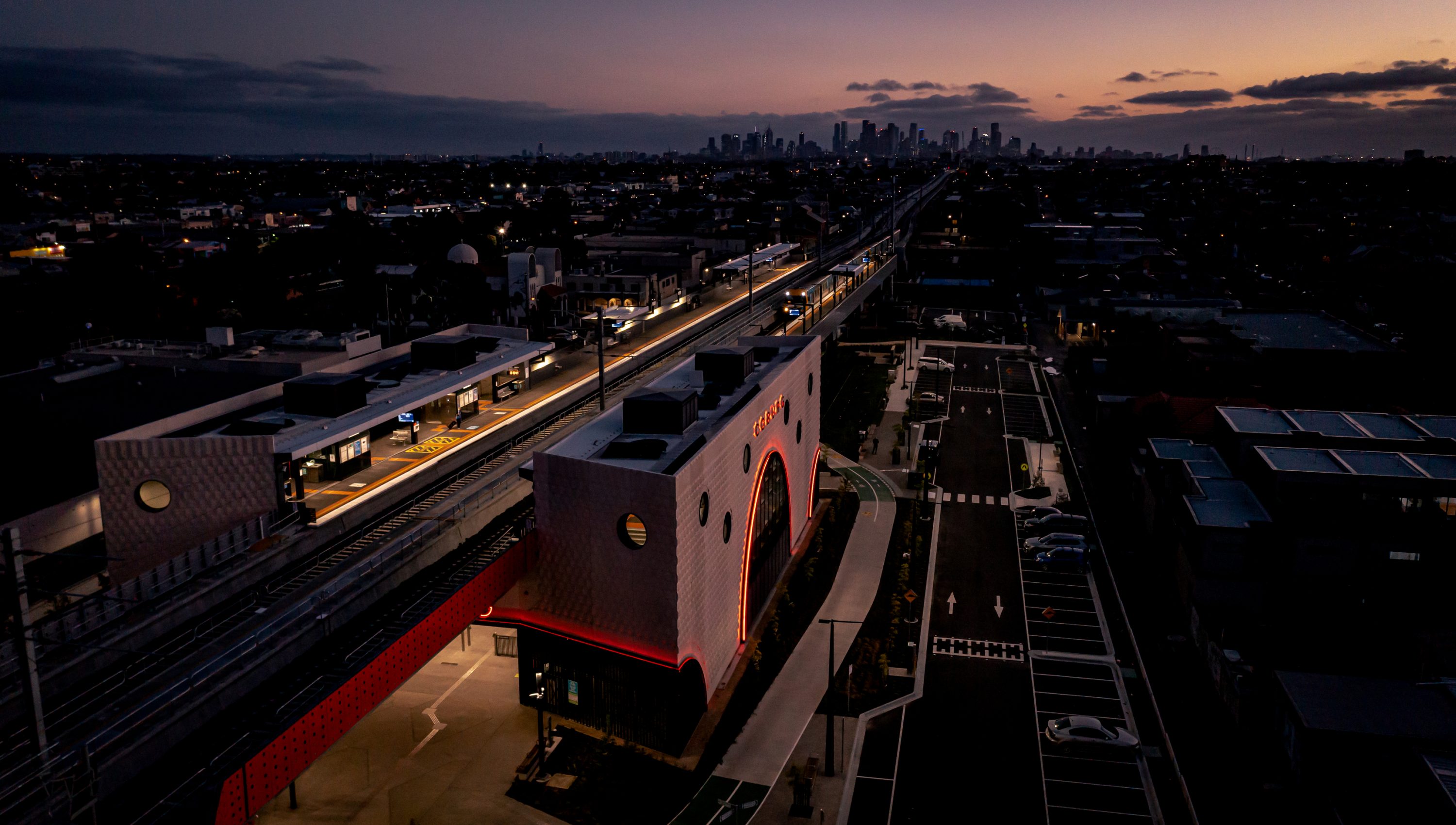 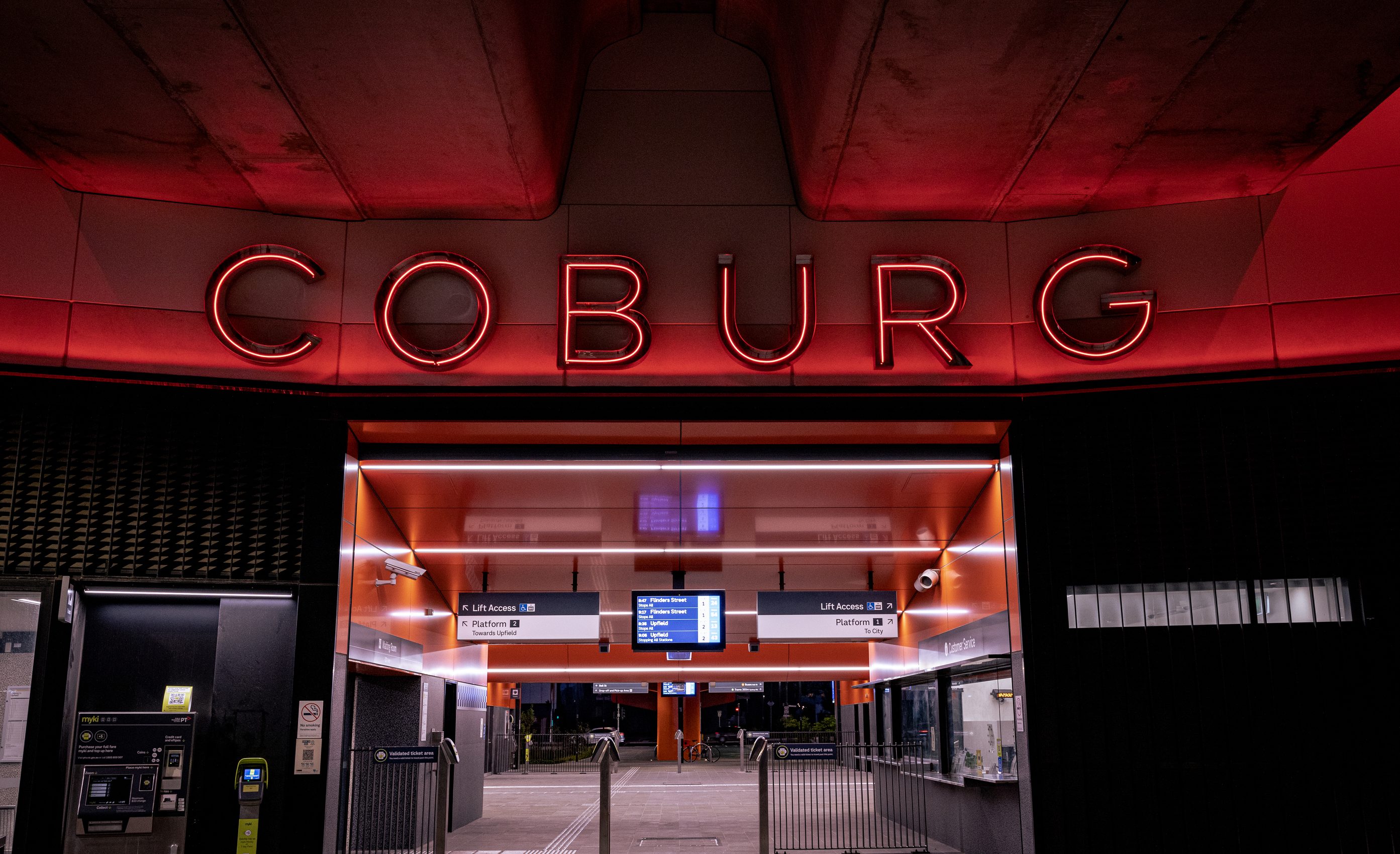 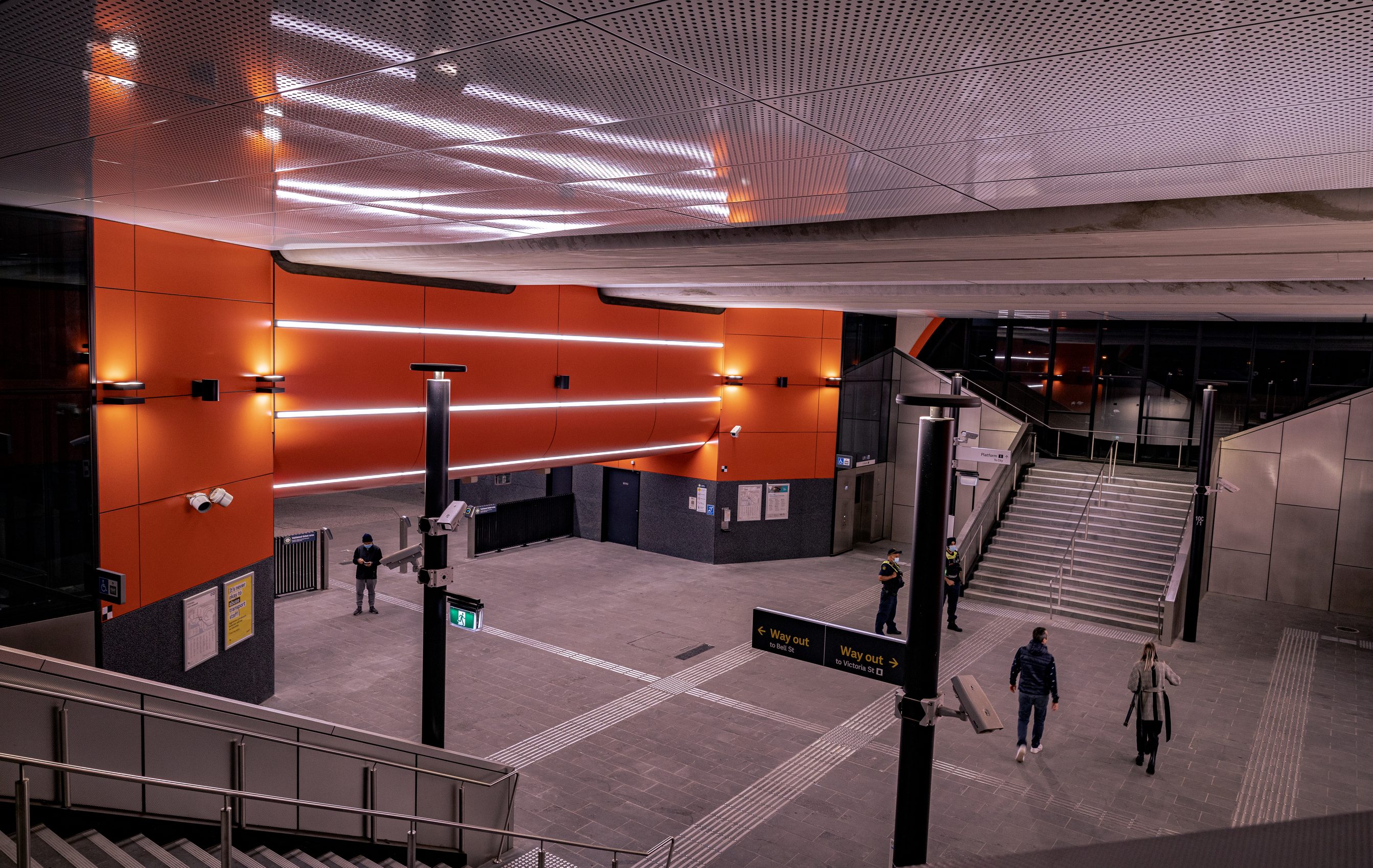 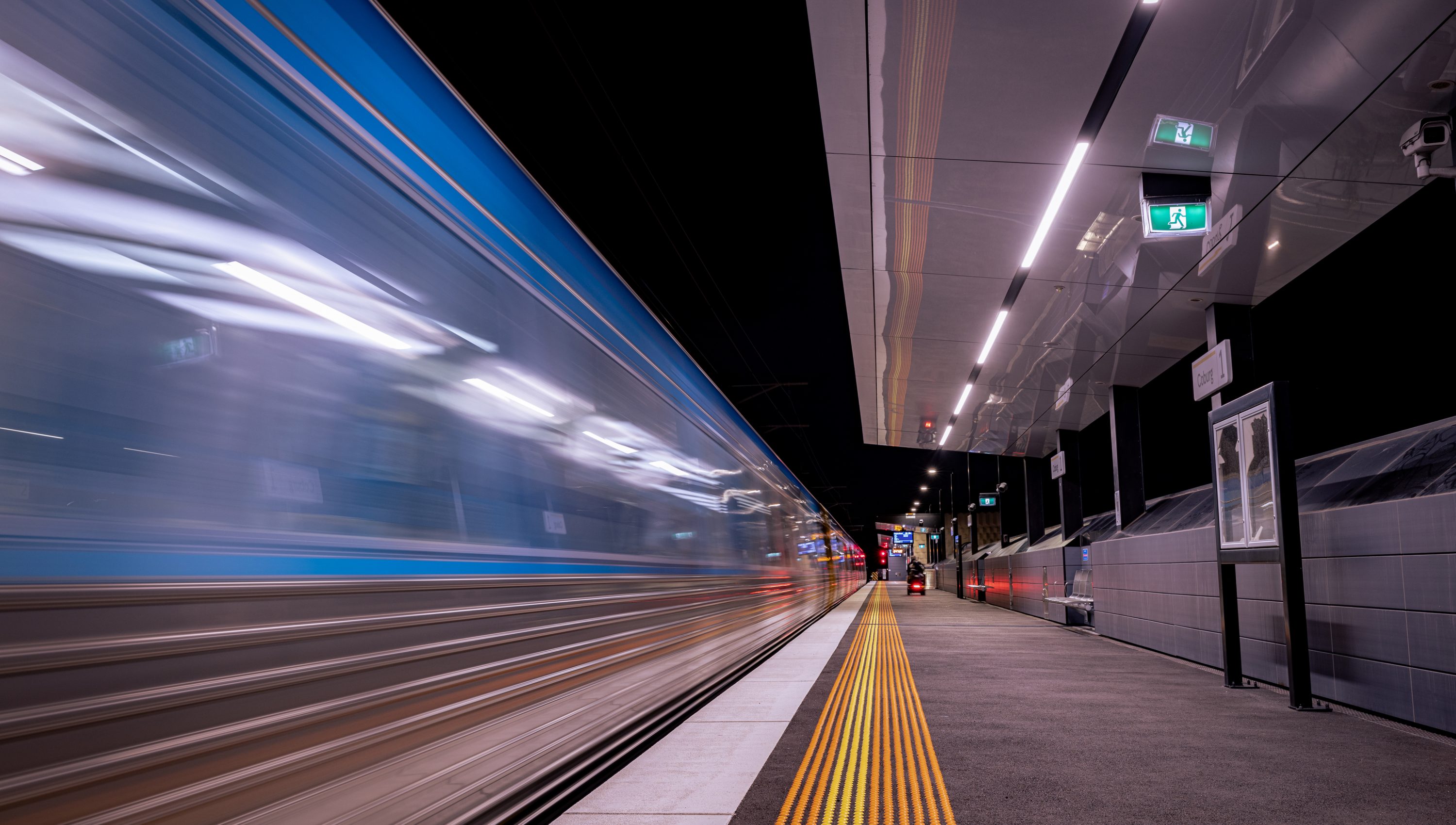 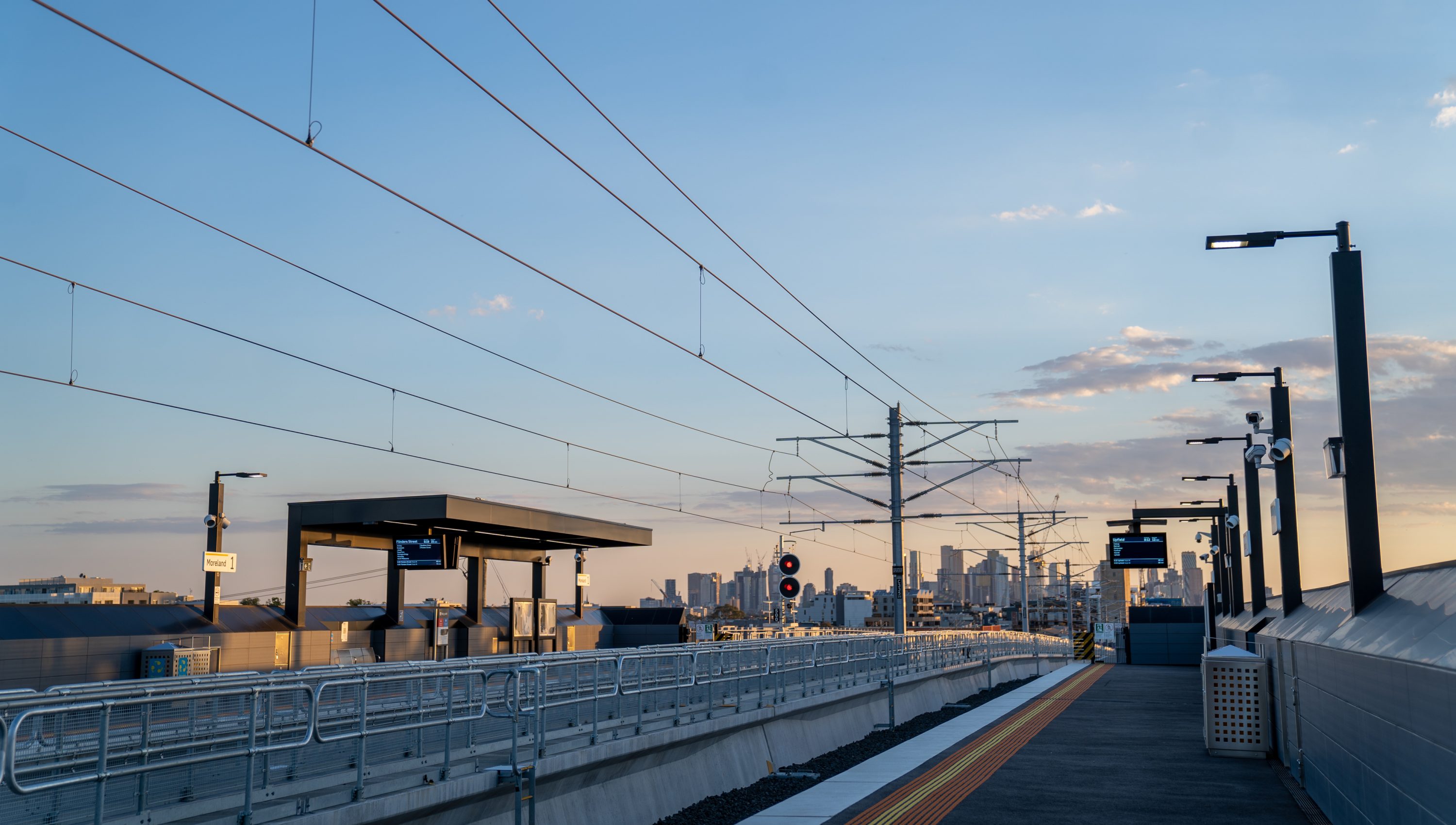 What was the brief for this project?

The project is a part of the Victorian Government’s Level Crossing Removal Project and removes four hazardous level crossings and replaces the at grade railway line with a new elevated Sky rail. Two new stations in Coburg and Moreland provide vertical connectivity to the elevated railway with improved amenities, and the creation of surrounding civic and parkland space. 22.5 hectares has been freed-up along the Upfield Line and relinquished back to the public. The resulting changes improve safety, transport and connectivity in the area.

Please explain the inspiration behind the architectural design of these stations.

The architectural design
The typology of Train Stations, their civic nature and their function as a form of public amenity has inspired and informed several key elements:

Arches
Arches are a subtle nod to the entries of the National Gallery of Victoria and Flinders Street Station, both of which are major civic buildings in Melbourne.

Colour
Colour has been famously used on many notable transport networks across the globe as a form of identity and placemaking. (e.g. London Tube, Hong Kong, Tokyo, Singapore).

Distinguishing the project from the bold colouring of neighbouring lines, the Upfield Line is attributed to an orange pigmentation to assert its unique identity as a geographical marking mechanism. It is expressed in the urban design elements of the pylons and screening, as well as in the architecture of the new station and its use of lighting.

Civic Presence and the Public Realm
These elements convey and signify its civic presence distinguishing it from the other typologies that exist in the suburban fabric.

The civic nature of the building presents the community with a sense of ownership that allows it to flourish as a transitory thoroughfare and community hub.

The train station as a typology defines functional and circulatory features such as the arrival concourse and vertical connectivity. Its significance above a private dwelling is signified by the height and scale of its spaces and a level of grandeur that is uncommon in buildings with such small footprints. Sightlines from staircases, views out of the arch windows and circulation – whether to wait at the front or back of the train have been integrated with the commuting experience. It makes the procession of connecting passengers from grade to the elevated platforms some 10 meters above ground.

What overall challenges were involved in this project, and how did Wood Marsh overcome them?

Space was a significant issue with the upfield line being on the of the narrowest rail corridors in Melbourne and often prone to flooding.

A “premium station” rating that was designed at Coburg would usually require double the amount of space. Wood Marsh analysed the technical requirements of the station and looked to challenge and improve the conditions through collaborative and considered design. The reduced floor area meant a lower build cost whilst also returning the space around the station back to the community for more landscape, art, and amenities.

Moreland Station uses a quarter the space of a typical “host” station. This places a higher emphasis on the surrounding green space and integration with Gandolfo Gardens. Indigenous codesign reinstates and integrates native flora with the existing context.

The complexity of the projects meant that aligning the requirements of stakeholders that represented the community and greater public was a key challenge, it however meant that the resulting outcome was architecturally successful in finding balance and satisfying the constraints.

How did lighting contribute to the architectural design?

Lighting is used to highlight key architectural elements – the textural quality of the hexagonal patterning, arches, stairways and station signage. It also provides wayfinding, surveillance and safety to passengers utilising the space at night

How did you incorporate the European heritage of the station in the new designs?

Both Moreland and Coburg Stations have subtle references to the original heritage-listed station buildings. Moreland Station abstracts bricks playing with texture and scale whilst still articulating the red and black colour of the slate roof and the flemish bond brickwork on the original building. Welsh slate was imported to restore the heritage buildings to its original design.

Coburg Station is informed by the off-white colour associated with the framing around windows, doors, and eaves around the Upfield Line heritage stations. Flat non-patterned moulded frames around windows, doors and openings on the original stations are incorporated around the new Coburg station’s windows and arches, creating a connection and visual narrative

Have you had any feedback from the local community?

The initial public response was one of hesitation to the elevated nature of the new railway, however, since its completion, feedback from the community has been overwhelmingly positive with notable mention of the upgraded amenities the new station provides, increased space, connectivity and amenities such as Pedestrian and Bike paths, playgrounds, outdoor fitness spaces, leisure areas that have been implemented in the space below the elevated railways.